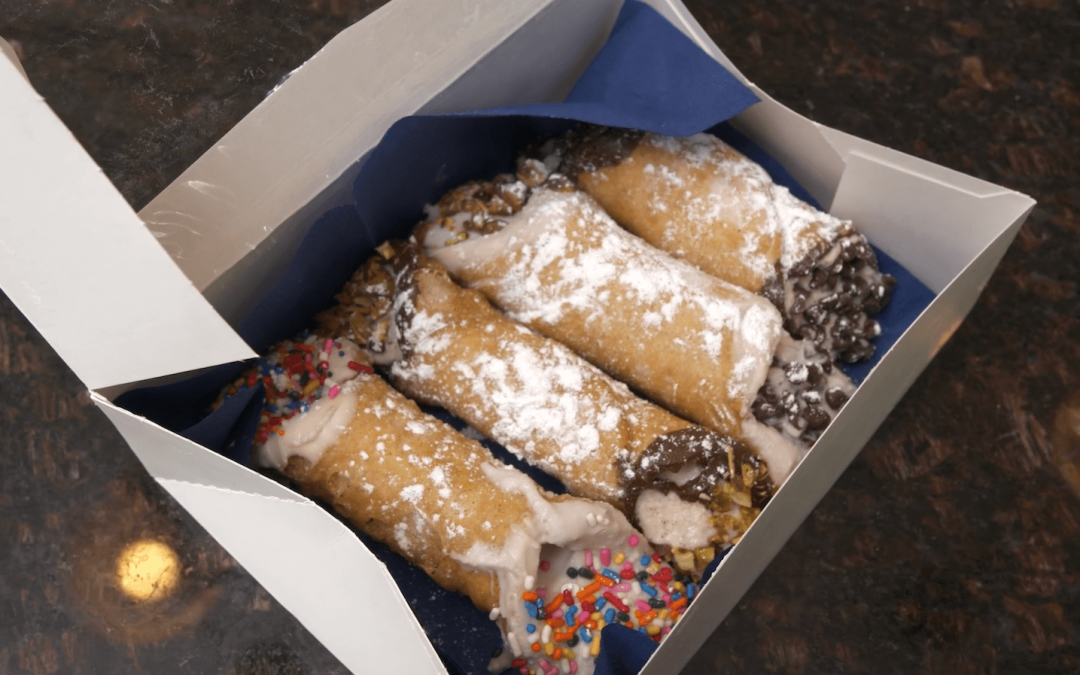 In a medium to large bowl, sift the flour, sugar, and salt.

Work the butter pieces into the flour with fingers until it is coarse like sand.

Add the white wine and egg yolk and mix with hands until it is a smooth dough (add additional wine if it is still too sandy and dry).

Create a softball like shape and then wrap in plastic wrap and refrigerate up to a day or while making the filling(s).

Drain the ricotta cheese of excess liquid in a strainer and let sit.

Using a mixer, whip the heavy whipping cream until fairly stiff and set aside.

In a medium bowl, whisk the ricotta cheese until smooth.

If the ricotta mixture seems to thin, fold in some whipped cream.

Refrigerate for at least 30-60 minutes up to several days.

*** Fillings can be as creative by using the Ricotta as a based, such as:

Let the dough come to room temperature unwrapped while pouring peanut oil (or canola oil) into pot or deep fryer and bring oil to 360-365 degrees F.

Spread flour on a smooth surface and rolling pin, and roll out the dough until 1/4 to 1/8 inches thick (too thin will cause shell to tear).

Using a 3-4” mold or glass bowl with edges, cut the dough into rounds.

Using cannoli molds, lay a mold long ways in the middle of the round and wrap one side of the dough over the mold, and then do the same on the other side, overlapping the dough.

Flair out the ends so they appear like the bells on the end of a trumpet.

Use egg wash to seal the folds over the mold.

Cook the shell in the oil for 4-5 minutes (do a test first and then taste and ensure the shells is fully cooked).

Remove the shell from the oil with metal tongs and place shell with the mold on a paper towel – caution as the oil is dangerously hot.

After the shell has become less hot and using a kitchen towel, hold the cannoli mold and slowly twist the shell off the mold without breaking the shell. Let cool.

To Fill the Shells

· To upgrade the presentation, hand-dip each end of the cannoli shell in melted white or dark chocolate after the shells have been made, cooked, and cooled yet before being filled

· After filling the shell dip the filling at the end of each side of the cannoli with toppings such as chopped pistachios, sprinkles, chocolate chips, candied fruit, etc.

** Can be served as dessert cocktail (digestive) or as a pre-dinner cocktail (aperitivo).

Serve and drink immediately or ingredients will separate if left to stand.

Join me as I cook with amazing women and find out what inspires them in life and in the kitchen.